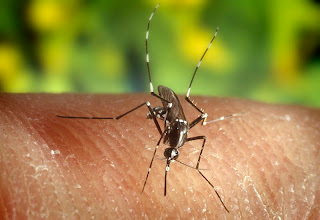 In the developed world, mosquitoes are best known as annoying buzzing insects that invade picnics and barbecues, but in the developing parts of the world they kill tens of millions of people a year. The most well known mosquito-borne disease is probably malaria, but there are dozens more, from parasites that infect pets with heartworm to viruses that cause fatal disease in humans.

Mosquitoes belong to the same insect class as flies (Diptera, meaning “two wings”), but they have a proboscis – a long needle-like mouth. This physical adaptation allows the female mosquitoes to feed on blood for nourishment when preparing to lay eggs for the next generation of mosquito. Different species of mosquito like different species of blood. Culex, Aedes, and Anopheles are a few genus’ of mosquitoes that bite humans.

Because the female mosquito drinks blood, it can also take up infectious agents that live in the blood. Some of these pathogens have a life cycle that includes using the mosquito stomach as an incubator and then are transferred to another bite victim (such as Plasmodium), or they are capable of surviving in progeny to be transmitted later (such as arboviruses). Mosquitoes that spread disease are known as vectors.

According to health agencies, malaria kills 2 to 3 million people a year in developing countries. The Anopheles gambiae mosquito transmits the sporozoites of the Plasmodium falciparum parasite to humans after incubating the parasite in its gut. The Centers for Disease Control (CDC) offer a diagram of the Plasmodium life cycle involving two hosts – an infected human and a mosquito, which then infects a second human. Malaria can occur in the United States, though mosquito control over the decades has removed much of the threat.

Malaria appears 10 days to 2 weeks after the infecting mosquito bite, causing fever, headache and vomiting. The World Health Organization (WHO) and other groups work to prevent disease with mosquito netting, insecticide control, and immediate treatment. Prophylactic treatment, including chloroquin and other similar drugs, is used for travelers from developed countries.

Mosquitoes also spread viruses that cause Yellow fever and Dengue fever, which are endemic to underdeveloped parts of the world. However, these diseases have been seen in the United States and Dengue has spread to the Caribbean and become a global issue according to the CDC. Dengue hemorrhagic fever, a specific course of Dengue virus infection, is transmitted by Aedes aegypti and Aedes albopictus mosquitoes. In addition to having a fever for several days to a week, the infected individual also suffers from bleeding and pain. No specific treatment exists for either course of infection with Dengue virus. Aedes aegypti also spread yellow fever. Yellow fever causes jaundice, with a 15 to 50 percent fatality rate. Yellow fever can be prevented by vaccine, which is recommended for travelers to parts of the world with endemic mosquito-borne diseases.