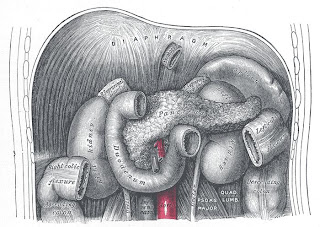 Pancreatitis is the term used to describe inflammation of the pancreas, which may occur in the short (acute) or long term. The inflammation is caused by activation of the enzymes released by the pancreas before they leave the gland, often by blockage of the ducts. Pancreatitis occurs most often in the context of alcohol abuse (70 percent of acute cases in the U.S.) and is thought to have a genetic component. Both acute and chronic forms of pancreatitis occur more often in men than women, and children are rarely affected. The inflammation occurs as a complication of a number of diseases, and even some medical treatments.

Pancreatitis is caused by activation of the enzymes released by the pancreas before they leave the gland. These digestive enzymes act on the pancreatic tissue, causing inflammation. Inflammation of the pancreas occurs most often in the context of alcohol abuse (70 percent of acute cases in the U.S.) and is thought to have a genetic component. Both acute and chronic forms of pancreatitis occur more often in men than women, and children are rarely affected (with the exception of those with cystic fibrosis according to the National Digestive Diseases Information Clearinghouse).

Inflammation occurs when the enzymes are retained in the pancreas when they should not be. Damage to or blockage of the pancreatic ducts can be caused by autoimmunity and the use of particular medications (e.g., estrogens, corticosteroids), as well as complications of hypertriglyceridemia (high levels of triglycerides in the blood), hyperparathyroidism, and cystic fibrosis. In addition, other causes may result in acute or chronic inflammation.

Acute pancreatitis is a sudden and short-term swelling and inflammation of the pancreatic tissue. It can occur as a complication of several diseases and conditions:

Acute pancreatitis may also result from accidents and abdominal trauma, surgery, and gallstones in the common bile duct.

Chronic pancreatitis occurs over the long term and causes permanent damage to the organ. Diabetes can result from the destruction of particular pancreas cell subtypes because it is the organ responsible for insulin secretion. Repeat episodes of acute pancreatitis can lead to chronic inflammation. Other conditions that may also contribute to the disorder are hypercalcemia (high blood calcium levels) and hereditary disorders of the pancreas.

An infected pancreatic pseudocyst results in a pancreatic abscess, a pus-filled cavity in the gland. The condition takes at least a week to develop after the initial episode of pancreatitis. Infection causes inflammation, further damaging the pancreas.