This is your brain on marijuana 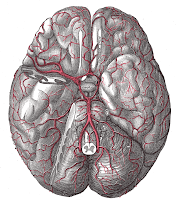 The effects of marijuana on the human body are still debated, and anecdotal effects of marijuana use, including euphoria, relaxation, paranoia, memory loss, and hunger, vary among users depending on duration, dosage, and method of use. THC crosses the blood-brain barrier and acts on cannabinoid receptors, which are present in high quantities in areas affecting pleasure, memory, concentration, coordination, and sensory and time perception. Most effects of use are short-lived, but chronic use prolongs the effects for days or weeks after THC has left the bloodstream. The reversibility of long-term effects is unclear.

Marijuana has effects on neurotransmitter uptake, cerebral blood flow, and brain structure, some of which have been inconclusive in research.

The effects of marijuana on the human body are still debated, especially amid social and medical pressures to alter political and legal views of the drug. Anecdotal effects of marijuana use, including stereotypical euphoria, relaxation, paranoia, memory loss, and hunger, vary among users depending on duration, dosage, and method of use. However, research has uncovered some specifics about the effects of certain chemicals in weed on the brain.

The effect of THC on the brain

The main active ingredient in the leaves of the Cannabis sativa plant (i.e. marijuana) is delta-9-tetrahydrocannibinol, known as THC. THC crosses the blood-brain barrier and acts on cannabinoid receptors, which are present in high quantities in areas affecting pleasure, memory, concentration, coordination, and perception (both sensory and time). Most effects of use are short-lived, as the half-life of THC is approximately 24 hours, but chronic use prolongs the effects for days or weeks after THC has left the bloodstream. The reversibility of long-term effects is unclear, but THC metabolites can remain in the body for more than a month.

According to another National Institute of Druge Abuse (NIDA) report, THC binding in the cerebellum and basal ganglia affects balance, posture, coordination, and reaction time. Animal studies have shown that memory impairment upon marijuana use is due to actions of THC in the hippocampus. Effects in the hippocampus also include sleep and wakefulness, as well as metabolism and body temperature. THC also affects the limbic system, which has an effect on emotion and acts as a reward center in the brain – making use pleasurable for the user. In addition, THC affects movement via binding in the cerebellum, substantia nigra, and globus pallidis.

The human body produces a cannabinoid called anandamide that normally binds the cannabinoid receptors in the brain. THC mimics anandamide and triggers its pathways, but introducing the chemical from the environment bypasses the body’s system of regulation; it only produces the chemical when needed. Thus, using marijuana affects the various functions normally controlled by the endocannabinoid in an unregulated manner. Anandamide plays a role in pain relief and dopamine regulation (in rats); thus, THC does as well. According to the University of Washington, marijuana is known to affect norepinephrine and dopamine, and possibly serotonin and GABA.

Jennifer Warner of WebMD summarized a 2005 study from the journal Neurology that looked at blood flow in the brain after marijuana use. Though blood flow increased in the brains of cannabis smokers, the resistance within the vessels also increased, indicating constricted cerebral vessels. The effects remained over the course of a month following the person’s last exposure to the drug. Other studies, such as one in Human Psychopharmacology in 2007, found that the changes in blood flow occur specifically in cannabinoid receptor-containing areas of the brain, but they result in insignificant alterations in attention and perception. A 2010 review of 66 brain imaging studies found that, when taken as a whole, study findings are actually less conclusive, with less blood flow among users in some studies, and differences generally are not significant between users and non-users in regards to brain activity during task performance.

Structural changes in the brain

Though research regarding changes in brain structure has generally been considered inconclusive, one Australian study in 2008, though limited, did find that long-term daily use appears to shrink the amygdala and hippocampus. The amygdala is a part of the brain that plays a role in aggression and fear. In regards to impaired memory and learning, the current theory presented by NIDA is that THC hastens age-related neuron loss in the hippocampus.

Younger users may be more susceptible to long-term structural changes. According to a USNews report in 2008, the frontal cortex of the brain, the area controlling judgment, isn’t yet fully formed by a person’s early 20s. The more THC a person’s brain is exposed to before full formation may result in reduced neural metabolism and function, affecting the individual into adulthood. However, researchers caution that genes may play a role, not just marijuana use.