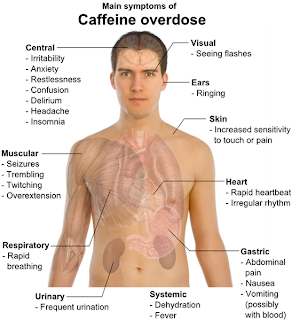 In 2006, energy drinks were a $5.4 billion market in the U.S. alone. Each year, more than 900 million gallons of energy drinks are consumed, and the market is growing. In 2008, a research group at Johns Hopkins University School of Medicine painstakingly compiled the caffeine content and per ounce dose of top selling energy drink brands sold in the U.S. The content of hundreds of brands on the market range from 50 mg to 505 mg per can or bottle (compared to an average of 77 mg in a 6 oz cup of coffee). Caffeine limits set by the U.S. Food and Drug Administration are 0.02%, which are not followed. Energy drink manufacturers exploit a loophole introduced by the 1994 Dietary Supplement Health and Education Act, often referring to the supplemental or beneficial qualities of their product.

Higher concentration energy drinks contain slightly higher amounts of caffeine, but in small volumes – one ounce shots of Powershot and Ammo have 100 and171 mg caffeine, respectively (100 and 171 mg/oz).

(Selection of energy drinks and their caffeine content taken from Reissig, Strain, and Griffiths, Caffeinated energy drinks - A growing problem, Drug and Alcohol Dependence, 2008. See the publication for a full list).

Caffeine limits set by the U.S. Food and Drug Administration are 0.02%, which are not followed. Energy drink manufacturers exploit a loophole introduced by the 1994 Dietary Supplement Health and Education Act, often referring to the supplemental or beneficial qualities of their product. Research has shown troubling side effects, such as caffeine dependence and heart problems, to energy drink consumption. Even habitual coffee drinkers have been found to suffer adverse effects. Drinking some of the higher caffeinated energy drinks, or multiple less caffeinated drinks, can lead to caffeine intoxication, which is characterized by anxiety, nervousness, insomnia, gastrointestinal problems, being jittery, and irregular heartbeat.

Dependence is a physical or mental need for a substance, resulting in disability when the body becomes reliant on what a substance provides. In the case of energy drinks, or even coffee, the substance is caffeine. There is currently lax regulation in regards to labeling the contents of energy drinks, and caffeine limits do not stay below the 0.02% caffeine that U.S. Food and Drug Administration (FDA) guidelines require. Some energy drink producers get by on a loophole created by the 1994 Dietary Supplement Health and Education Act, but not all are worse than the cup of coffee many are accustomed to drinking.

The recommendations for caffeine use are that caffeine not be given to those under the age of 12 years, no more than 100-200 mg should be ingested in a 3 or 4 hour period, it should not be used as a remedy for sleepiness, and use should be discontinued if an irregular heartbeat is experienced. Despite these recommendations and warnings, which are present on over the counter no-doze tablets that contain 100 mg caffeine, many energy drinks contain 2 to 5 times the recommended dose (up to 500 mg caffeine) and do not contain these warnings. An average cup of brewed coffee contains 12.8 mg/oz caffeine for a total intake of 77 mg in a 6 oz cup, a regular soft drink (e.g., Coca-Cola) contains 2.9 mg/oz for a total intake of 34.5 mg in a 12 oz can.

Even habitual coffee drinkers have been found to suffer adverse effects from energy drinks, with toxicity and overdose mimicking mental disorders. Caffeine intoxication includes anxiety, nervousness, insomnia, gastrointestinal problems, tremors (being jittery), and irregular heartbeat. Addiction to caffeine can result in withdrawal symptoms, including headache, dizziness, muscle stiffness, depression, and fatigue, when the substance is not ingested. Caffeine withdrawal has been described in the medical literature for a century.

Two or three cups of coffee is considered moderate caffeine intake, but a single energy drink can provide many times this amount of caffeine and in a shorter time span. Caffeine acts directly on the central nervous system, with peak stimulation reached in approximately 30 minutes, but the effect is short-term, leading many who rely on caffeine for increased attention or awareness to continuously seek out more caffeine, in the form of coffee or the high dose energy drinks - a clear sign of dependence.