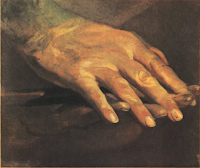 Ten percent of the human population is left-handed. Over the years this has been attributed to a number of intangible reasons. In recent years, research has shown that handedness, or hand dominance, may stem from the symmetry of the brain during early development. Genes determine this embryonic development and a certain genotype switches which hemisphere controls handedness and language skills. But it's even more complex - lefties have more symmetric distribution of language across the brain.

Whether a person uses their right or left hand to perform tasks is based on the asymmetrical development of the brain during embryogenesis. Handedness is based on hand dominance, as in the brain favors one over the other. The idea that hand dominance stems from a developmental feature is indicated by the relatively constant percentage of the population who are left-handed (10 percent) and that left-handedness tends to run in families.

Because handedness is rooted in brain development, the underlying cause of left-handedness is likely genetic. A 2007 study from Oxford University did identify a gene associated with left-handedness – a gene that is also associated with dyslexia and schizophrenia. The gene, LRRTM1, controls the distribution of tasks in the developing brain. In people who are left-handed, the left side of the brain control emotions and the right side controls speech and language – the opposite of what is seen in right-handed people. Many aspects of human function are due to brain asymmetry. However, according to a NYTimes interview of a genetics, neurology, and psychiatry professor at University of California, individuals who are left-handed have less brain asymmetry. Language is also more evenly distributed across the hemispheres of the brain in left-handers.

Other research has identified other differences in the brains of right and left-handed individuals, from how quickly they can carry out tasks and process multiple stimuli to disease risk. However, like other complex physical features of the human body, handedness likely stems from a number of genes that alter how the brain processes hand dominance. In fact, many people who are left-handed likely use both hands to some extent (ambidextrous). In essence, those with left hand dominance process information across the brain in a more bilateral manner. Researchers claim that the more appropriate term for being left-handed is non-right-handedness.

This understanding of handedness has only occurred in recent years. As recently as the 1980s, parents were forcing their left-handed children to use their right hands. Despite the realized benefits of left-handedness, a stigma has been attached to this characteristic of being human; so much so that, in previous centuries, those who used their left hands dominantly were ostracized or accused of having pathological conditions. The reason why some people are left-handed was once answered with claims of possession, incarnate evil, and mental illness. Now we know it’s due to a more uniform development of the brain, which is caused by the presence of certain genetic factors.