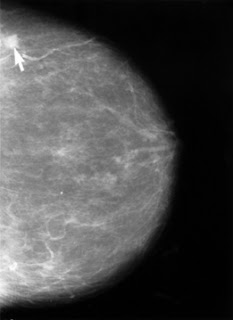 One in eight women will be diagnosed with breast cancer in their lifetime according to the National Institutes of Health (NIH). Though the risk of developing tumors in the breast is associated with hormone or radiation exposure, alcohol use, and other environmental toxicities, genes appear to play a significant role in a third of cases. Mutations in the BRCA1 and BRCA2 genes have been associated with hereditary breast and ovarian cancer. According to the National Cancer Institute, these genes also put men at risk of breast cancer. However, other genes are also potential hereditary components of cancer, and not every BRCA-mutant carrier will develop cancer. A woman’s typical lifetime risk of breast cancer, according to Massachusetts General Hospital, is 13 percent, but a woman with a BRCA mutation could have a risk as high as 80 percent.

Genetic testing for BRCA mutations has been available since the 1990s. Women with a family history of breast cancer can receive genetic counseling and testing to determine their risk of developing the tumors. A positive genetic test could be followed with more screening, such as more frequent mammograms (though this could also increase risk and should be discussed with a doctor), or some with a more severe family history may opt for preventative mastectomy (breast tissue removal). According to investigators at Mass General in 2009, most women are not aware that a genetic test, and options, is available to them if they have a family history of aggressive cancers.

Various types of genetic tests are available for breast cancer, but they focus on BRCA. The involvement of other genes is overlooked. Testing a family member with cancer is the best way to determine whether the hereditary tumors are caused by BRCA, and whether testing will determine one’s true risk. BRCA mutations are responsible for only about 5 percent of breast cancers according to the MayoClinic. The tests require a blood sample that can easily be taken at a doctor’s office. The sample is then sent to a laboratory for the particular test being requested. Most tests evaluate the DNA to determine whether a mutation is present in the BRCA1 or BRCA2 genes. Another test looks at the proteins encoded by these genes to determine whether they are normal.

In June 2011, the U.S. Food and Drug Administration approved a different kind of genetic test for breast cancer, one that can determine the response of the tumor to treatment. Her2-positive breast cancers are more aggressive and respond better to herceptin treatment. The test can determine whether the tumor will respond to such treatment, as well as help in the prognosis and support of the patient by knowing whether the tumor is Her2-positive.