Nicotine as a gateway drug

Research published earlier this month in the journal Science Translational Medicine reported the effects of nicotine on mice in regards to cocaine use.

The researchers took two sets of mice - one was exposed to nicotine and the other wasn't. Both were then exposed to cocaine. They found that the nicotine-exposed mice were more likely to seek out cocaine again, by a great deal (78%!).

They found that exposure to nicotine caused epigenetic changes (specifically histone acetylation) in genes related to the reward system in the brain, allowing changes in the expression of certain genes during exposure to cocaine, inducing a more addictive experience. 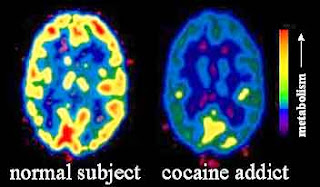 Research has already shown that brain function alters with addiction. But this is one of the first pieces of evidence of genetic mechanisms underlying the "gateway" theory of drug use. Those cigarettes are affecting your brain...via your genes!
at 11/29/2011 08:16:00 AM