What? Erectile dysfunction drugs may cause hearing loss 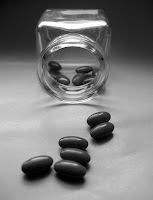 Around this time last year, researchers published a study showing that approximately one-third of men using erectile dysfunction drugs, particularly PDE5 inhibitors, suffer from hearing loss. The average hearing loss in the general population is one-sixth of men. Hearing loss as a potential side effect was added to the labels of popular brands Viagra, Levitra, and Cialis in 2007. But men don't seem to notice.

Erectile dysfunction, also known as impotence in some cases, occurs for an estimated 15-30 million men, including roughly 5 percent of 40-year-old men. The large variation is due to different definitions of the disorder and the fact that many men may not seek treatment. Since the advent of PDE5 inhibitors as erectile dysfunction drugs, such as Viagra (sildenafil), Cialis (tadalafil), and Levitra (vardenadil), the rate of diagnosis and treatment has increased, with three times as many visits being for erectile dysfunction in 1999 than in 1985.

The drugs were originally meant to be used as treatment options for pulmonary hypertension, a very dangerous disorder in which the blood pressure within the pulmonary vessels is too high. The side effects of the treatment, even if it involved temporary hearing loss, would be considered manageable compared to the lethality of the untreated disorder.

In October 2007, the U.S. Food and Drug Administration (FDA) re-labeled the erectile dysfunction drugs Viagra, Cialis, and Levitra, and the pulmonary arterial hypertension drug Revatio (sildenafil – identical to Viagra, just with a different brand name taped on the bottle), to include warnings about the potential side effects users may experience with their hearing. The FDA had 29 reports of PDE5 inhibitors causing sudden hearing loss in relation to the dose taken. Not all of the cases had symptoms prior to the hearing loss, which would normally include dizziness, tinnitis (ringing in the ears), and vertigo.  At that time, the FDA had found no causal relationship, but the agency felt the dose correlation and the observation of hearing loss in some clinical studies prior to marketing the drugs warranted re-labeling to warn of the potential for the side effect.

In May 2010, a study was published by a group at Alabama at Birmingham School of Public Health reviewed the cases of 11,500 men over the age of 40 between 2003 and 2006. Among all men, one in six (~15%) were deaf or had hearing loss. Among only those taking PDE5 inhibitors (erectile dysfunction medications), one-third had long-term hearing loss. The theory is that the increased blood flow induced by the PDE5 inhibitors affects the vessels in the ear, which can cause hearing dysfunction and damage to the vestibular components, the hearing apparatus within the ear.

Anyone who experiences hearing problems after taking erectile dysfunction drugs should seek the advice of their doctor and reconsider their treatment options.