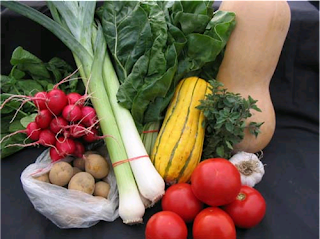 Research has shown again and again that antioxidants are beneficial to the human body. But it's really about the buzz word "antioxidants". It seems like some new food or concept, but antioxidants are just vitamins and minerals - something your parents kept telling you to eat as a kid!

Antioxidants are chemicals that protect cells from free radicals, atoms formed by some chemical reactions with oxygen (like the oxidation of low density lipoprotein, the LDL form of cholesterol), which can occur naturally or in response to environmental exposures to toxins, such as cigarette smoke. Antioxidants are usually found in foodstuffs (Nuts, grains, fish and poultry, green leafy veggies, fruits) and include several vitamins, including vitamin A, E, and C, as well as lycopene, lutein, and selenium. Increased intake of antioxidants is thought to protect against a number of disorders, including heart disease and cancer, and recent research has shown potential for protection from stroke. However, supplementation and dietary intake appear to offer differential effects with supplementation not providing the same benefits.

Studies on stroke in women

A 2000 study published in the American Journal of Clinical Nutrition, which examined antioxidant intake and stroke mortality in more than 34,000 postmenopausal women, found that vitamin E, acting as an antioxidant, may protect against death from stroke, but only if ingested via food. In 2011, a study published in the American Heart Association journal Stroke found that a greater total dietary antioxidant intake reduced stroke incidence in more than 36,000 peri-menopausal and post-menopausal women, regardless of cardiovascular disease status. Women without cardiovascular disease had a 17 percent lower risk of stroke, and women with cardiovascular disease had a 45 percent lower risk of hemorrhagic stroke. Approximately half of the antioxidants ingested by the women in the study were from fruits and vegetables, but the other half was from a variety of foods including grains, tea and chocolate .

Studies on stroke in men

Why antioxidant supplements may not work

Supplements may not show the same benefits because they focus on a single vitamin or antioxidant. The beneficial effect is most likely caused by the interactions between antioxidants and/or their cumulative effects. Clinical trials found that supplementation may work in those with increased levels of oxidative stress, perhaps by boosting the free radical scavenging process, but that those with normal oxidative stress levels benefit most from dietary intake.